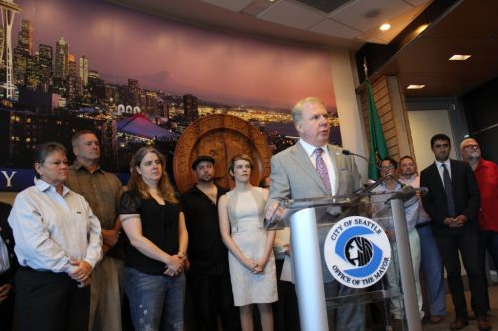 Crime on Capitol Hill has also contributed to the development of other actions, including the city police station "safety" project, and the rainbow pedestrian area. According to the mayor's office, in the first seven months of 2015, the city police department has received the 41 LGBTQ enemies on the report of criminal and civil cases, than the first seven months of 28 2014 rose by 46%.

"Seattle has long been a everyone can find acceptable, tolerant," Murray's mayor said in a press release, "we celebrate LGBTQ community of getting further equal, we will support to promote more inclusive in Seattle."

The action plan is in a LGBTQ taskforce formulated under the proposal, pointing to public safety, LGBTQ youth, building environment and the public understanding of four big problems.

In addition, a study of all the buildings and public facilities in the city of single toilet set to gender neutral review legislation has been passed on to the council.
Posted by Unknown at 8:57 AM
Email ThisBlogThis!Share to TwitterShare to FacebookShare to Pinterest
Newer Post Older Post Home