SAN JOSE (CBS SF) — On a seemingly ordinary Tuesday in San Jose, the light pink, blue and white stripes of the Transgender Pride flag was raised over the Santa Clara County government building at City Hall for the first time. 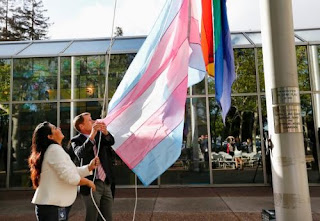 It's the first time the flag has ever been raised by a county government, thanks in part to Santa Clara County Supervisor Ken Yeager, the county’s first openly gay elected official.

He said the flag is a sign to transgender community that the county will support them.

“We still find great percentages of gay people with depression, suicide, and drug and alcohol abuse,” said Yeager. “And so, this is our one way to say you’re accepted here, you can be open here. And I think that leads to better health in general for everyone in the community.”

The flag raising comes ahead of the county marking the sixth annual South Bay Transgender Day of Visibility, which will be celebrated on Saturday, April 2.
Transgender activist Lance Moore was brought to tears by the message that the flag sends to those who are living in isolation and who might be ready to come out.
“
To know that they are a part of civil life, that the courthouse is for them too, I hope that will make them a little more ready to believe the next step is possible,” said Moore.

Moore added that the flag signifies that the time of bullies and bigots has passed.
The transgender community will come together again at the Billy DeFr…